Bitcoin jumps in July and August. What's next?

BTC began growing on July 21 after a prolonged fall.

Bitcoin's fall after the May maximum is commonly attributed to Elon Musk’s speeches and the repressions against Chinese miners. However, in the world of high-liquidity assets, reasons and outcomes often switch places or can take either place. The Bitcoin market is a market of big players and they are not equal, either. What is the reason for one, is the consequence for another.

Bitcoin growth after the July lows  was likely provoked by Elon Musk’s speech at the B Word conference in the third decade of July. The case is similar to January 2021, when bitcoin has reached $40,000 and then plunged to $30,000 until Musk spoke his word. As a result, we saw a strong impulse and sustained inertial movement up to and over $60,000.

Later on, during the depreciation, bitcoin drew a triple bottom with three candles on May 19, June 22, July 20. At the extremums, around $30,000, the difficulty was 25.04T, 19.93T and 13.67T, respectively. Bitcoin rate dropped by 2.2 times (54%), difficulty - by 1.8 times (45,5%). As we see, it was mostly fundamental factors: the rate followed the difficulty, which, in turn, followed the hashrate drop that resulted fromChinese repressions. Obviously, the euphoria of overhyped market expectations turned into a panic sell based on other, more realistic, reasons. 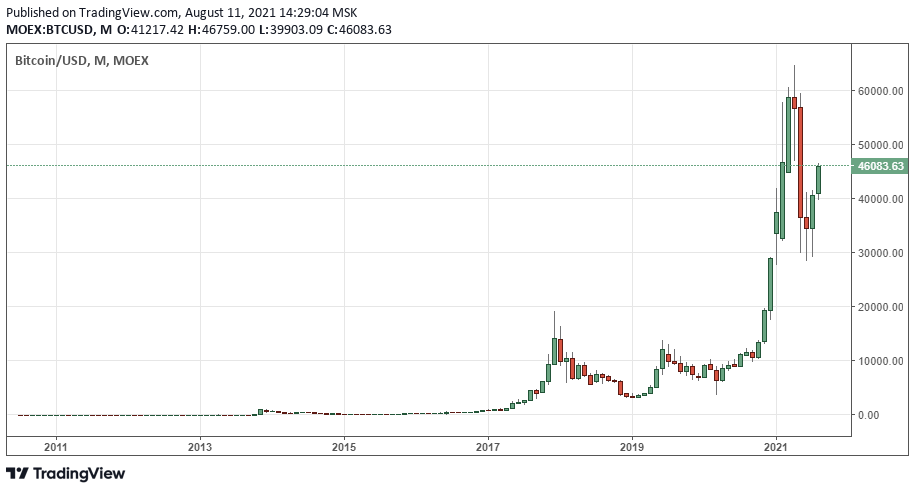 All of the above is a typical situation for a young bitcoin market, where the  crowd of enthusiasts is just the peak of an iceberg, concealing the whales in the dark waters. But whales are impatient and competitive, too. Let’s get back to the moment when MicroStrategy bought bitcoin for $50,000. It makes no sense to argue whether technical or fundamental analysis is more accurate: bitcoin is an explosive mix of reasons and outcomes, where either the crowd or the whales may come through.

Moreover, at current leverage levels even the most delicate “ah-choo” can trigger dramatic market moves, so we will be at the mercy of long and short squeezes for a while. Today it’s Musk, tomorrow another oracle may have the symptoms of a light cold. So how to protect yourself from the lows and get a stable income from the cryptocurrency market? Let’s calculate the potential income and losses in the same time periods.

Statistically, everything is a bit different. A trader enters the market at highs and painfully waits it out, keeping his positions in the best-case scenario. Any talk about profits is premature. Why are we so adamant? It is because traders like this are cannon fodder for professionals. Someone should buy bitcoin at$60,000 in order for our perfect trader to sell it. This buyer should absorb all the intoxicating market fluids and relish it every hour of every day.

Now let's get back to the consistency of this profit. Let’s say, a trader doesn’t consider himself “ideal.” In the beginning of the year he takes 40% of the deposit and gets a Promo cloud mining contract  from CryptoUniverse with a term of one year or more. Regardless of possible bitcoin rate growth, he gets about 40% income in BTC. And then he sells bitcoin mined using the contract somewhere around May. We get the same 200%, but the deposit is not 20%, but 40%. And this doesn’t include trading games or attempts to create your own mining farm as an alternative.

Cloud mining allows you to get bitcoin rewards. And everything else is done by the market and “ideal” traders, while you simply watch your balance growing. The bitcoin rate began a new phase of growth with a minimal difficulty rate last year!

CryptoUniverse offers the most attractive and flexible cloud mining contracts that you can choose in a convenient interface. Choose the contract duration, estimated daily income, pay-off period and electricity costs. You won’t need to trade ranges if the market goes sideways or to catch trend extremums. Your deposit will be increasing regularly, and income will be predictable. By joining CryptoUniverse you will have much greater potential through the co-buying option, or you may even purchase your own miner and host it in our data center.

Despite its utter unpredictability, the cryptocurrency market endows us with an impressive opportunity to get income from computing power. CryptoUniverse offers convenient instruments for risk hedging and increasing profit predictability. Use our cloud mining, hosting and cobuying offers. Calculate your project numbers at a consultation with our client service team. We will be happy to provide you with everything you need to look at the market differently.